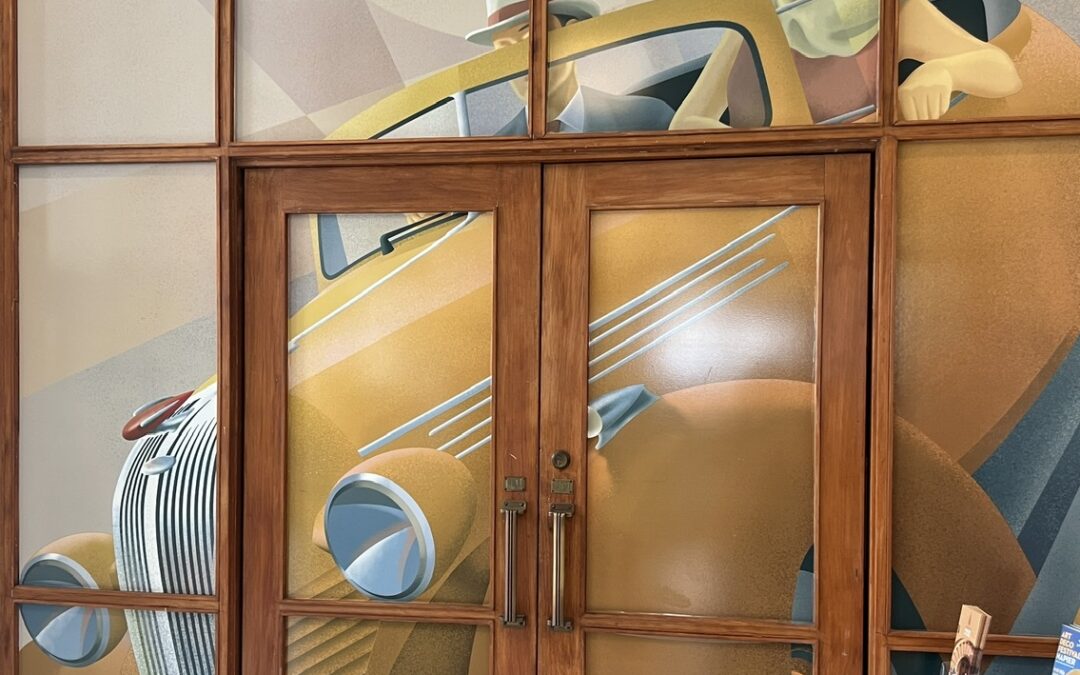 Barely minutes from the ferry dock in Wellington one comes face to face with Wellington’s iconic “Beehive”, as the Executive Wing of the New Zealand Parliament Buildings is colloquially known. The building is open to the public for regular tours and hoping to get in for one ( but managing our expectations ), we “sheepishly” ( no pun intended ! ) inquired if a walk-in opportunity was possible. Unfortunately, all tours for that day were full. Not to worry, it would give us more time to make our way up to Napier, which was, in any case the prime attraction for us on the North Island.

The scenery heading North-East was generally rural ( and consistently green ! ) with Palmerston North being the only town/city of any size in between Wellington and Napier. Heavy rains and floods in the days before had forced us to take a slight detour giving us an even more “rural” perspective on the North Island. While the road out of Wellington was a typical 4 lane motorway that soon gave way to more typical, and often windy, two way arterial roads. Like in the South these roads included quite a few of the the country’s notorious “single-lane” bridges. Essentially a two-lane highway becomes a single lane road on many bridges. No problem to navigate on longer, straight roads but can be hair raising when approaching from almost blind corners. There is a defined priority etiquette and people seem to generally obey it.

“Art Deco, short for the French Arts Décoratifs, and sometimes just called Deco, is a style of visual arts, architecture, and product design, that first appeared in France in the 1910s, and flourished in the United States and Europe during the 1920s and 1930s.” (Wikipedia).

Who would have known ( in the early 1930’s) that this contemporary architectural theme would soon have a profound impact on a small, and otherwise relatively unknown, coastal city in New Zealand ?

To this day New Zealand’s deadliest natural disaster, the great Napier earthquake (measuring 7.8 on the Richter scale )  devasted Napier in the early hours of February 3rd, 1931, killing 256 people. The town and surrounding area was obliterated. What happened next, though, ties in to the Art Deco trend that was sweeping the world. Napier now had to be rebuilt from scratch and the town leaders and architects of the day aggressively adopted the Art Deco theme. As a result, much of Napier ( and most of its public buildings as well as many of its commercial ones ) were built in the Art Deco style. Napier, to this day, is recognized as one of the best preserved Art Deco cities in the world and attracts devotees of the style from all corners of the globe. If you’ve ever been to the South Beach area of Miami, you’ll immediately recognize the style. Distinctive and iconic, Napier’s city leaders have done an outstanding job of preserving ( and promoting ) this unique heritage. While examples appear elsewhere in the country, due to the tragic events of 1931 nowhere else in New Zealand has the range of examples that Napier does. We love the style and spent hours wandering the town just soaking it all up. Some of its building are the most photographed in the country.

Our travels in New Zealand were impacted by the cyclone-like weather that had rained down upon the North Island just days prior to our arrival. Gisborne, just to the North, was our our next planned stop where we had long looked forward to a reunion with Carol ( a very good friend from our days in Japan in the mid-80’s ). Sadly, the road between the two cities was cut and we had to settle for a FaceTime call. Lots of catching up was done and it was wonderful to reconnect after so many years. Funny how, in such circumstances, it is so easy to simply pick up right where you left off ( our last visit, we eventually determined, was in 1996 ! ).

In the same way both of us had missed the far South in previous travels here, we’d also both missed New Zealand’s famous Coromandel Peninsula and wanted to make sure we got to it this time. It too, had been cut off by the same North Island storm and floods just days earlier but fortunately the roads had been cleared enabling us to visit this time. Cutting through Rotorua ( where we overnighted ) we detoured to the Waikete Valley to enjoy the area’s famous thermal hot pools before continuing North up to the town of Whitianga in the Coromandel area.

Prior to reaching the Coromandel Peninsula there was a rather lengthy but reasonably scenic drive up through route 2 and 28 to reach the Coromandel area. Easy travelling, as it was mostly flat agricultural land with no major cities in between, though we passed pretty towns and a large waterfall along the way.

While the South Island probably gets the nod for the best beauty and roadside scenery in New Zealand, the Coromandel Peninsula in the North must rank a very close second – the area is simply stunning. I’ll let the next few pictures tell the story – it’s a major draw for Aucklander’s many of whom have cottages/cabins ( “baches” in Kiwi slang ) in the area. We could have spent much more time here !

From Coromandel it was an easy 2 hour drive back down to Auckland where we ( sadly ) bid adieu to our van delivering it back to the folks at Britz. Having spent almost 2 weeks in their vans we can both attest to what an incredibly enjoyable and easy way that is to see New Zealand. Highly recommended – we’d do it again in a heartbeat.

Our last days in the country were spent in Auckland, exploring more of its sights, this time in considerably better weather. Folks had suggested we get out on the harbour ( Auckland’s setting is stunning, attracting private yachts and cruise ships from all over the globe – the Cunard “Queen Elizabeth” was in port while we there, as was the “Le Laperouse” a French Antarctic adventure cruise ship ) and on our last day we did just that – the quaint seaside community of historic Devonport lies just to the North of Auckland and we had a very enjoyable day sampling it stores, sights and restaurants while ambling along its tree-lined foreshore.

All good things must come to an end, though, and so it was with our impromptu New Zealand detour. We absolutely loved the country, it’s people were incredibly hospitable, travel was “uber” easy and it’s natural beauty unquestioned. I hope it wasn’t be our last visit as there are definitely a few corners we’d like to explore further.  As we started to prepare for Australia we took a look at the progress of our ship ( the Talisman ) as it  made its way across the Pacific; we had not looked for a while but seems it is now 3 days ahead of schedule so we might, with luck, just get to pick it up a bit early. Fingers crossed !