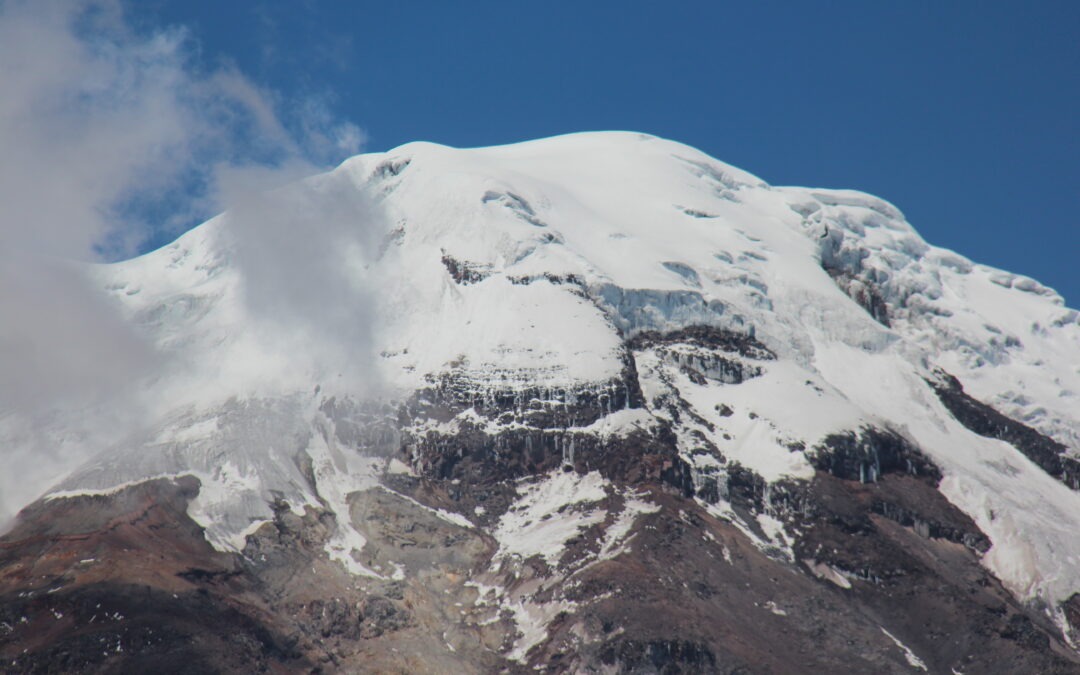 It’s probably fair to say from a sightseeing perspective that the bar was high after a week in the Galapagos. Suddenly, we thought, the rest of Ecuador was looking a lot less interesting. Banish that thought ! While we would not be seeing more stunning underwater marine life, quirky birds or Jurassic-like reptiles, the route south from Quito to Cuenca ( sometimes referred to as “Volcano Alley” ) in fact had much to offer.

Ecuador’s second highest mountain, Cotopaxi, was our first port of call and is one of the worlds top 10 most active volcanoes. We had hoped to see it in all its glory and do a short hike, however the weather was just not cooperative. Cotopaxi was, for the most part, shyly hiding behind clouds though we did get a brief view of its distinctive snow capped peak. Drizzling rain on the drive down put paid to any hiking notions. Making up for some of the disappointment at Cotopaxi was the excellent evening spent with Adrian and his Swiss/Ecuadoran family at their delightful Cotopaxi hacienda/farm campground, Cuello de Luna. A favorite of hiking groups, this secluded spot was one of our favorites so far. The alpacas and gentle St. Bernard’s just added to the appeal.

On our route south to Banos, Adrian had recommended a visit to Quilotoa Crater Lake, a 2 hour detour for us but ultimately well worth the drive – at almost 13,000 feet just walking from the car park to the viewpoint was exhausting, however the view at the end made the exertion worthwhile

One of Ecuador’s favorites, the thermal spa town of Banos has been a standard overlander stopover for years. Fond memories of an earlier visit fresh in our minds we made straight for the thermal pools which were very relaxing. Banos also offers an array of exciting outdoor activities for those so inclined ( it was all about the pools for us ) along with great restaurants and coffee shops where we whiled away our time.

Seems to have been a week for meeting motor-cycling overlanders and Banos was no exception. After meeting two Americans, Thomas and Shane, at Quilotoa who were en route to Ushuaia like us, we spent time in Banos sharing information with Tina, a solo German, and 4 Czech riders who were also going south. The Czechs had also ridden down the west coast of Africa and up its east coast so were full of useful tips for us ( should our plans for Africa pan out down the road ). We did experience some rain in Banos and while we’ve ( well, at least I’ve ) often thought a two-wheeled overland adventure would be fun, watching them pitch tents in the rain, pack away wet equipment for a long day’s ride and then ride off getting drenched again, I must admit that some of the allure has worn off.

Chimborazo is Ecuador’s highest peak – higher, in fact, than any other peak north of it in all of the Americas. Getting to it ( up close ) involves a drive on good ( if somewhat pot-holed ) roads to just over 4,000 metres ( 13,200 feet ) and then an extremely wash-boarded dirt track to a climbers refuge at 4,700 metres ( 15,400 feet ). While the challenge of the drive and then just walking around in such low oxygenated air  was an experience, the best views were actually down much lower. We had been warned Chimborazo can be temperamental ( for viewing ) up close. A few hardier types were trying to hike at that elevation but it was very slow going.

Spending time at the high elevations not only brought us some great sights and challenging drives but helped prepare us for Peru and Bolivia where we will be experiencing several mountain passes in the high 4,000 metre range and one even nudging 5,000 metres. No altitude sickness for either of us but definitely felt a bit wobbly when we got up too quickly or exerted ourselves too much. The best views of Chimborazo were actually nearer to the entrance of the park but we still we wanted to tackle the last 8 kilometres – all rough, badly washboarded road, just to see how we felt at that elevation if nothing else.

Just a two hour drive south of Chimborazo is the town of Alausi, famous as the jumping off point for the “Nariz Del Diablo” or Devils Nose train, to Sibambe. Completing the track in 1902 was an astonishing feat of engineering that allowed the train to navigate very steep descents/ascents and almost perpendicular walls in the high Andes via a unique zigzag system. The ride was truly spectacular, considered Ecuador’s finest, and is popular with train buffs the world over. There is a great story on the history of the train here:

Ecuador’s 3rd largest city, and arguably its most beautiful would be our last stop for the week. Cuenca, set at 2500 metres, has a year round mild climate that makes it not just popular with Ecuadoran’s but also a haven for North American retirees ( as well as others ) – the number of foreign residents is obvious after just a short walk around this very pretty riverside city, or a stop in any coffee shop.

Cuenca is famed the world over for production of original “Panama” hats. While that may seem a tad oxymoronic, as one of our regular readers ( Charlie Harris ) pointed out when I did an earlier post from Panama, “Panama” hats are not actually from Panama. There’s an interesting background to that story and we got it when we visited the Homero Ortega factory right here in Cuenca. A fascinating tour, and some beautiful product to choose from – yes, we bought one ! More detail on the origins and history of the Panama hat can be found here:

Our host in Cuenca, Miriam, turned 48 on the day we arrived. With visitors from Canada, France ( the couple in the van pictured beside ours ) and 4 other visitors from the US and Chile staying in the house ( she runs an AirBnB as well ), Miriam invited us all in to join her family and share in her birthday celebrations – a great time was had by all and it was a wonderful end to another week in Ecuador.