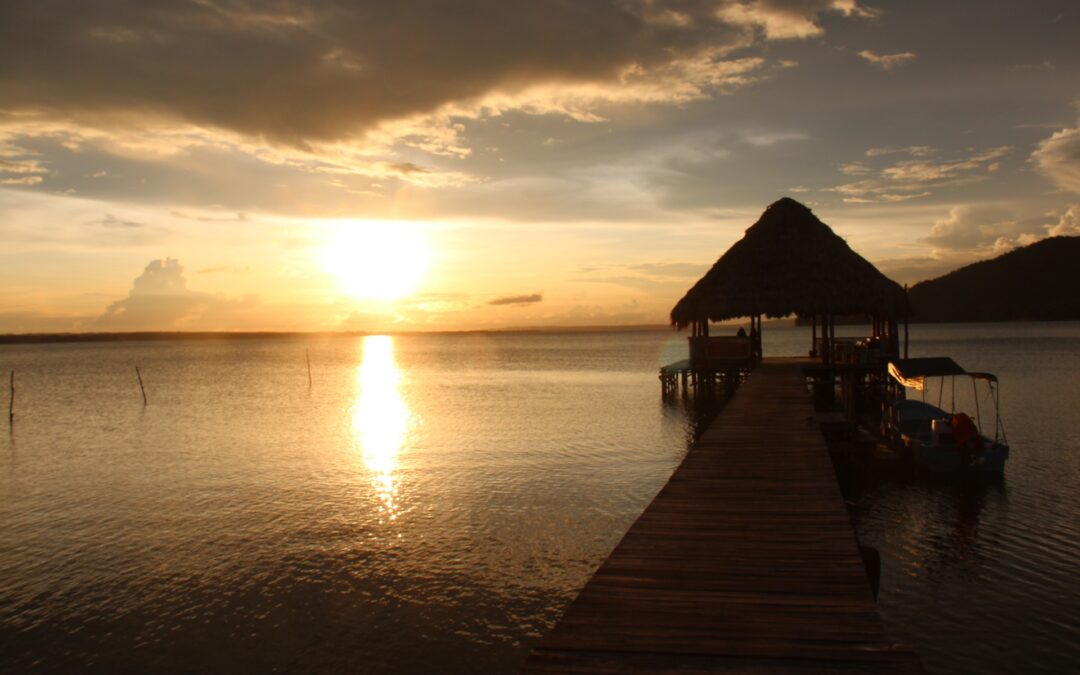 While the hotels were a welcome break (as was the break from doing our own  cooking in this heat), we won’t get to Argentina sitting by pools in Mexico. Funnily enough, right in the middle of our rest, while walking down the main street in Tulum, we bumped into a French couple who had just come “up” from South and Central America. Lots of info sharing done and they assuaged some concerns we had about places they had just visited – and to which we would travel next.

We will of course miss Mexico – the people were super friendly as always, the food excellent, the scenery stunning and of course, so many amazing sights. A few things we won’t miss – no one ever has change, refried beans splattered over every meal, and the big one…….TOPES !!! Hopefully no more of those wicked speed bumps as we go further south….but we won’t hold our breath.

Our “R&R” break complete, the truck re-packed, we set off for Belize. Not our first visit ( we had been before in 2006 ) so on this occasion Belize was more a transit point than a destination ( you can’t really avoid Belize when you enter Central America from the Yucatan in Mexico ). The plan was just a few days – and to focus on the interior, which we had skipped over before, with a planned stop in San Ignacio to visit the Mayan ruins of Xunantunich just before the Guatemalan border.

Belize is a delightful little country ( “little” being the operative word- you can cross it in few hours ) and the Belizeans are wonderfully friendly and helpful. Crossing the border was a breeze, and the journey across the country brought back many memories of our former visit – colorful buildings, kids in school uniforms ( I guess it’s the Aussie in me – something just seems so inherently proper about that ! ),  constant reminders of its British heritage with English spoken ( which was nice, after 2 months of Spanish ! ), the queen on their money, speed limit signs in “miles” and fuel sold in “gallons” ( albeit the US gallon, not the Imperial one ). Curiously, for an ex-British colony, driving is on the right, not the left – but no complaints there as it made it easier for us coming from Canada.

Once in a while we “pull a long day” on the road and the trip to Belize was one – the run from Tulum all the way to San Ignacio was uneventful save for a late afternoon storm and quite a bit of roadwork en route. We chose San Ignacio as it was driveable in a day, had a  camprground with an excellent reputation ( well deserved as it turned out ) and was on the doorstep of the aforementioned Mayan ruins of Xunantunich. Ruins, I should add, which proved to be both unexpectedly impressive and delightfully free of the plethora of trinket hawkers that plagued every ruin we saw in Mexico. Peace…..quiet….solitude, at a tourist site ? Something we had not known for over 2 months.

In preparation for the next stage of our trip we had done further research on the countries ahead and were starting to look at shipping options from Panama to Colombia ( you can’t drive it, a little strip of impenetrable jungle called the “Darien Gap” stands in your way ). Much time is now being spent trying to find shipping dates that work, and that align with our plans to fly back to Canada for a few weeks at Christmas. While we don’t have any absolute time restriction on our travels, one thing that is weighing on us is timing for the Carretera Austral ( Chile’s famous Southern Highway). It’s best done no later than March/April and since it has always been a prime reason for doing the PanAmerican highway we don’t want to sacrifice making that “weather deadline”.  It may well mean that we have to move more quickly though Central America having now spent so much time in Mexico.

Seems there’s always a curveball you don’t expect when tackling something like this and we got one this week as we looked more carefully into the countries ahead of us – it seems not only can’t you fly a drone in Nicaragua, you can’t even possess one ( and, like almost all overlanders, we have one ) . They are routinely confiscated at the border. We heard about it, then checked it out and it’s right there on Google. Even saw a YouTube video from a guy who had his taken from him. Why that would be a rule boggles the mind ( isn’t it enough to just say you can’t fly it ? ) and is a logistical nightmare for the thousands of travellers just transiting Nicaragua as part of a longer trip – what do you do with your drone ? Short answer – send it home. So a morning was spent packaging up the drone and mailing it back to Canada. A completely pointless and somewhat expensive exercise ( and I will be without it for 2 months now )  but hey, what do you do ?

The exit from Belize went as smoothly as the entry and likewise the crossing to Guatemala – the folks there simply could not have been more friendly and helpful. Fuelled up, then cashed up at the first town and we were on our way to Tikal. Frankly, we debated even visiting considering we had been in 2006 and the weather looked very “iffy”. But hey, we were this close, why not, right ? Well, we probably shouldn’t have – it just poured raining most of the time, we got totally drenched and photo ops were limited. Sometimes I suppose you should just take a pass. It has not become any less impressive but unlike our last visit ( beautiful sunshine ) this time it was the opposite. C’est le vie .

While Tikal this visit was a bit of a bust, we did have a real “score” on our first night Guatemala – probably one of the best camping spots we have been at. Right on the shore of Lake Peter Itza, all facilities at hand – people go to El Muelle for the sunsets and we caught a very nice one.

Tikal also happens to be located right near one of Guatemala’s prettiest little towns ( and I mean little ), the town/island of Flores. Thirteen years since our last visit and it was just as picturesque as we remembered it. We used the time there to enjoy a wonderful crepe breakfast and after some sights to do some deep diving into our upcoming shipping options – pretty soon a decision had to be made. Would we go by container ( we needed a 40 footer, and ideally would share one ) or RoRo ( essentially, a large ferry ). Pros and cons to both but either way we had to be VERY sure of the truck’s dimensions so did some double checking on that. As I write we are waiting on final quotes and will likely decide where, when and how to cross the Darien Gap in the next week. Colon in Panama to Cartagena in Colombia looking most likely at this stage.

Regardless of shipping options our next move was south so headed to Rio Dulce where we wrapped up the week. A beautiful drive through Guatemalan countryside to get there and a rather unique kind of place as well. It’s one of those few places where overlanders and “yachties” cross paths. The “go to” campsite is actually a marina, frequented by sailors resting up in the calm waters of the Rio Dulce just a few kilometres inland from the Caribbean coast during hurricane season.

Bumped into a young French family there travelling the America’s who had driven in with their motorhome while they were visiting other friends who had just sailed in. The “friends” had been sailing for 4 years and dropped in to give birth to a new baby. Four years in a yacht, and now with a new “addition” – now that is adventurous !