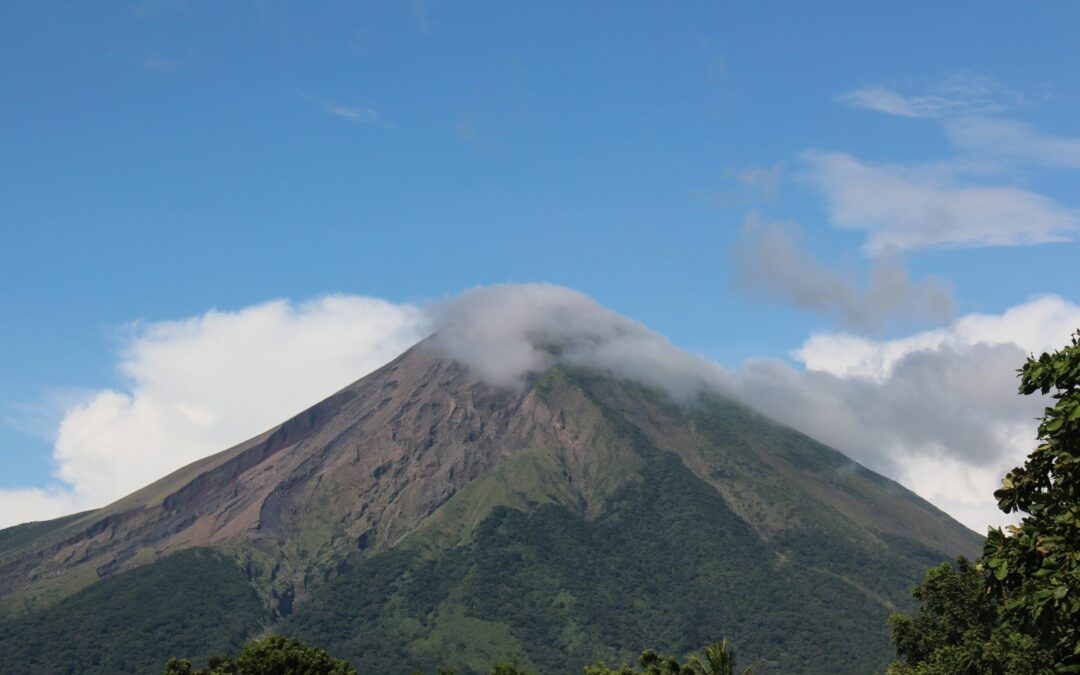 Feedback from folks on the road ( along with our personal preference ) was that we should travel El Salvador mostly via the coastal route – this would allow us to visit the renowned beach community of El Tunco while at the same time skirting around San Salvador – it’s capital city and not one of the safer places in Central America.

Leaving Rio Dulce, highway CA13 took us across the eastern end of Guatemala before turning south on the CA9. Reasonable roads although very heavily travelled by large trucks. At Rio Hondo the initial plan to cut into Honduras briefly to see the ruins of Copan was shelved – did we really want to see yet ANOTHER Mayan ruin ? It was a unanimous no – so we kept going. It turned into other of those long driving days ( in time at least, if not always distance in Central America) and got us to the small town of Jalpatagua where we closed out our 4 days in Guatemala at a beautiful campground run by a delightful Guatemalan family. All spoke English, served up great food and treated us like part of their family- we even joined in some table tennis ! Always nice to leave a country on a high note and with Guatemala we certainly were. We loved it in 2006 and equally as much in 2019. Fantastic people.

Crossing from Guatemala to El Salvador could not have been easier. Exactly as detailed in our trusty iOverlander app and despite the need for a temporary vehicle import permit, a rare border crossing that was totally free of charge- great first impression in El Salvador ! In addition to avoiding the capital, San Salvador, the route chosen gave us the chance to drive El Salvador’s famous Ruta de Flores ( Route of Flowers ), a bonus we had not expected. Though slightly early in the season for the full blossoming there were plenty of brightly coloured flowers to be seen along with some amazing mountain views, coffee plantations and quaint El Salvadoran towns and villages.

Our next few nights were spent beach side in El Tunco- the El Salvadoran hospitality and friendliness ( as well as great food ) were there in abundance – actually, kind of a tough place to leave. We would also certainly miss the campsite’s talking parrot – “Lola”.  Lola could whistle, and regurgitate “Hola”, “Amigo” and “Amiga” endlessly ( apparently even able to distinguish gender ! ) – she took a particular liking to Lois.

One of the great things about Central America is that the countries are all very small and the driving distances short – El Tunco all the way to the eastern side of Honduras was an easy 5 hour scenic drive – notable mostly for quite a number of volcanoes along the way. Crossing to Honduras was another easy border, and all went smoothly aside from the phalanx of local “helpers” that descend on every gringo who approaches the “frontera”. Talk about persistent- these guys stick to you like gum on a shoe until you relent and use one or two of their services, always for a small fee of course. At this particular border, one guy was very helpful so I slid him a few dollars. As  we got back to our car there was another “helper” standing by it….this one demanding a dollar for guarding our truck while we were inside doing paperwork !

Arriving later in the day in Honduras the need was simply to find a hotel, rest and move on the next day – we had no plans for in depth exploring here. The roads were of excellent quality so travel was easy. In fact, we’d say they had the best roads in Central America so far, and were far better than expected. That was all good, however it was the next border that we were concerned about – Nicaragua.

What with the whole drone thing ( they never even asked incidentally but we are glad we sent it home ) and conflicting reports from other overlanders about the ease of the crossing we approached with some trepidation. Alas it was all for nought – save for some more aggressive border “helpers” it could not have gone more smoothly. Everyone charming, polite and professional.

So there we were, just over half way through the week and in and out of three countries ! While that sounds like a lot, one has to remember how small these countries are. You can, without much difficulty, cross from eastern El Salvador, through Honduras ( the part above the Gulf of Fonseca ) and almost across the length of Nicaragua in a long day’s drive. We haven’t suddenly “changed gears” and are not now travelling with that urgency, but our decision to be ready to ship to Colombia from Panama by the latter part of November meant we simply had to look at the map, determine our priorities for the coming weeks and stick to a fairly rigid schedule . As I write we are speaking to a potential shipping partner whose desired shipping schedule matches ours – roughly speaking, two vehicles in a 40ft High Cube container will halve our RoRo shipping costs. To boot, there is much greater security of the vehicle and its contents in a locked container versus the RoRo option. We are certainly hoping this works out to both our benefits – we should know within a week.

Our limited time here in Nicaragua forced some quick decisions upon us with regard to itinerary. As for El Salvador and Honduras we deliberately chose to avoid the capital ( Managua ) and our direct route through made that easy. Other than driving, our time here would be limited to the volcanic island of Ometepe ( in Lake Nicaragua ) and San Juan Del Sur ( another beach community ) in the south near the Costa Rican border.

Omotepe did not disappoint – a beautiful island setting approached by ferry from San Jorge, its lush green foliage and perennially cloud – shrouded twin volcano backdrop provide almost an eerie aura, as if some giant beast would soon appear. No giant beasts, but quaint villages, an outstanding butterfly sanctuary, waterfalls and some idyllic view points. Great to take a break from the truck and get on a motorbike for a day !

As our week closes out we find ourselves en route to San Juan Del Sur – have heard so much about this place and we’re really looking forward to it. Once a thriving tourist town, and somewhat of an “in” spot on the Gringo Trail through Central America, the troubles in Nicaragua in 2018 ( which are all over now ) sadly caused a precipitous decline in visitor arrivals which are only now starting to recover. True, frankly, for much of Central America – nowhere we have travelled in the past 2 weeks has there been anything remotely close to “normal” tourist levels. The “migrant caravan” stories earlier this year have probably caused some of that. While we certainly enjoy the relative solace ( and better deals that ensue ), we hope for the sake of the many local people this has impacted that folks do start returning – there is so much to enjoy here and we only wish we had time to see more of it.