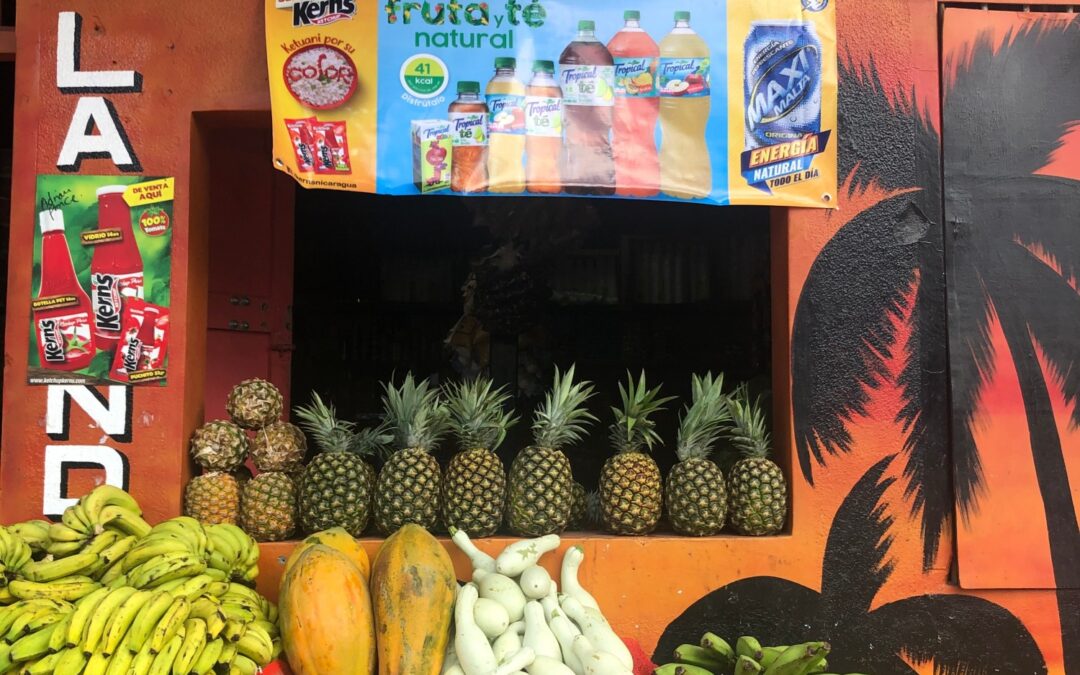 Our last days in Nicaragua were spent at San Juan Del Sur, the beachside/surfing community close to Costa Rica.  It was obvious that the town is still suffering from the effects of the Nicaraguan protests last year – restaurants and hotels were very quiet and there were not nearly as many tourists around as would be expected this time of year. A good sign – cruise ships have just started stopping in again after a long break and one arrived in the bay as we left. A popular place for Overlanders to stay there is actually at the port – and we did – since it had all the facilities and 24 / 7 security….and an awesome view of the bay !

Apart from getting temporarily lost our entry to Costa Rica went very smoothly- leaving Nicaragua meant we had now safely navigated the so-called ‘more dangerous’ parts of Central America ( El Salvador, Guatemala, Honduras and Nicaragua) so, while there was a sense of relief, we were also actually a bit annoyed. Why all the fuss  ? In all four countries the people were incredibly friendly, helpful and polite – always. At no point were we threatened, nor did we ever feel at any risk. Everyone we met there said the same thing. We both wish we just had more time. Hopefully the word gets out and the long suffering folks in the tourism business there start seeing normal tourism levels again.

Given our deadline to get to Panama we decided to limit our travel in Costa Rica to a week – a beach community ( we chose Samara on the Nicoya Peninsula ), the canopy walk ( in the clouds ) at Monteverde, possibly a National Park and lastly San Jose itself. While we would not have time to stay, our route out to Panama along the south coast would give us a look at Jaco beach and, ideally, time to explore the very small but famous Manuel Antonio National Park.

Costa Rica differs significantly from the 4 countries before it. More developed, very politically stable ( it’s NEVER in the news for the wrong reasons ) and with a generally higher living standard – commensurately higher prices, of course ! Many other travellers and Nicaraguans had warned us about costs in Costa Rica – consensus was 2 and in some cases 3 times higher than the rest of Central America. It turns out in many cases they were not wrong. Quite a shock. For the first time since we left Canada we were finding costs, at times anyway, higher than at home. That’s all fine, it is a more developed country overall, however we were still getting poor wifi, and cold showers ! Generally, pay more get more – but not so much in Costa Rica !

While it’s hard not to like Costa Rica, our overall impression after a week here was just a bit “underwhelmed”. We had no issues, people were great ( as they have been everywhere in Central America so far ) but the sights and attractions just did not match our ( admittedly elevated ) expectations. The beaches were nice, the water warm, but ( personal bias here ) neither of us could get excited about black, or at best, grey, sand – give me a traditional white sand beach any day ! The much hyped Monteverde cloud walk was again, “nice” , but we saw nothing we had not seen in the coastal rainforests of Oregon or other less renowned parts of the world. What we did enjoy in Monteverde was the cool nights ( and easy sleeping ) that comes with mountain elevations over 5,000 feet – hard to believe we were still in Central America. Delightful !

Our search for a shipping partner to cross the Darien Gap had put us in contact with a young American lady, Cassey, and based on our travel schedules it seemed San Jose was a great place to meet as we were both close by. Cassey is driving a VW Vanagon solo on the same route as us so it was a great fit. We certainly hope the plan works and if we can get the vehicles on the ship they would go in a shared container from Colon, Panama to Cartagena, Colombia later in November – fingers crossed !

Both Lois and I had come down with pretty nasty colds ( flu ? ) which possibly dimmed our usual travel enthusiasm this past week. No fun being sick on the road ! We wandered the downtown of San Jose after meeting Cassey but as it started to rain little exploring was done. Highlight of the day was an awesome lunch we treated ourselves to at a French bistro. Good food in Costa Rica !

Our route out towards Panama took us back down to the coast, via Tarcoles ( famed for the crocodiles that lie under the Tarcoles bridge – probably the most impressive wildlife we saw in Costa Rica ), Jaco Beach and on to Manuel Antonio National Park. While we drove right down to the park entrance and could see what a stunning sight it must be ( the road in is spectacular – it is Costa Rica’s second most popular sight ), we were too late to have a meaningful visit that day – thunder clouds and the first drops of rain sealed the deal. Further exploration would have to wait for a return visit.

Our week closed out well down the Costa Rican coast and an easy drive away from Panama. Assuming the shipping goes as planned it should give us almost 2 weeks in Panama – a week of that ( almost anyway ) will be tied up with vehicle preparation, vehicle inspections and container loading still leaving us enough time to explore what Panama has to offer. We’re looking forward to it !

On a completely different note, a few months ago I wrote an article for Truck Camper Adventures reviewing the Outfitter Caribou Lite that we have. A lot of interest was raised in the drawer system we had custom built to create additional storage in the rear seat area of the truck. I was asked to write a separate article on the drawers and it was just published. For the more technically inclined, read all about how to build a rear seat drawer system here ( much credit to Chris and Andy of course ! ):