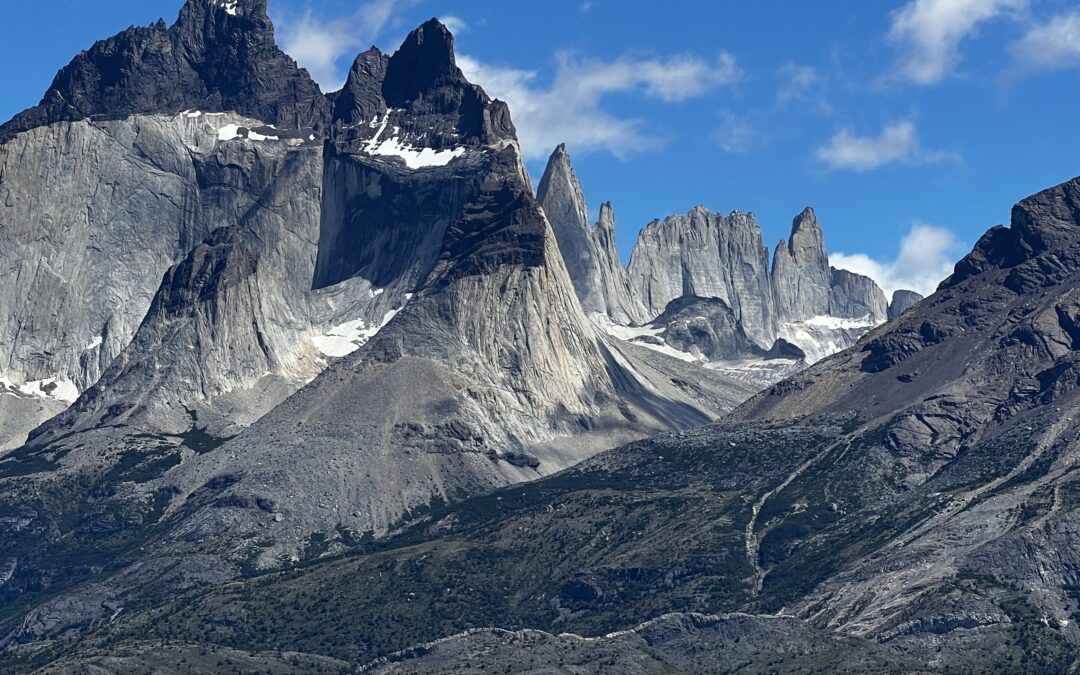 That’s a long blog subject but the last 10 days have indeed been busy, exciting, and ( for us personally ) very momentous !

The signature attraction in ( or rather, near ) Puerto Natales is the trekkers “Mecca”, Torres del Paine National Park ( locally referred to as “TDP” ). Whether you come for the famous “W” or “O” ( lengthy and challenging hiking circuits whose routes resemble those letters ) or simply to drive, ride or take the myriad shorter walks through the park as many do ( the latter not requiring advance booking and reservations ), one is never disappointed. The place is, in a  word stupendous – we enjoyed 3 leisurely days there, did several shorter hikes, and never tired of the unique mountain shapes ( especially the famous “towers” and “horns” ), turquoise lakes, glaciers and abundant wildlife (highlights being the sighting of several condors and 2 pumas – well beyond our expectations ! ). Below are some of the shots we took- it really is a place like no other…!

As hard as it was to drag ourselves away from TDP, not far south were two other “attractions”. Representing both the purpose and in a way the climax of this long drive, (but, hopefully, by no means the end of it ) the first of the two was the Fin de Camion ( “end of the road“ ) at Fuerte Bulnes, just south of Punta Arenas.

Our journey on the PanAmericana started at the northernmost road/community in continental North America, ( the Dalton Highway at Deadhorse, Alaska, USA ) back in May 2019, and concluded ( albeit significantly Covid interrupted ! )  this past Sunday, over 43,000kms later at the southernmost road/community on the South American continent, on Route 9 near Fuerte Bulnes, Chile.

From here, the truck finally now points ( mostly at least ! ) north ! In case you wondered, no, we do NOT intend to drive it all the way back to Canada ( but it’s amazing how many people ask us that ) !!! Omicron travel restrictions permitting, we will drive up through most of Argentina, Uruguay and possibly southern Brazil before shipping it home from either Santiago, Buenos Aires or Montevideo sometime in the northern Spring.

Rather fitting that the last 18kms to the “end of the road” sign and road barrier on Route 9 was gravel ( getting used to it down in these parts ! ) since that is exactly what we started on in Alaska’s far north. A great feeling of accomplishment ( and much perseverance! ) to have completed it, but at the same time a little sadness that our biggest milestone was now behind us. The Fuerte Bulnes area is very scenic and peaceful, right on the Straits of Magellan and fittingly perhaps, we wild camped right there, toasting to the completion of this part of our overlanding journey – very serene listening only to the birds and the waves and watching ships pass through the very same strait that Ferdinand Magellan first navigated 500 years ago, way back in 1520 – this part of Chile, known as Magallanes, bears the Spanish spelling of his name on streets, plazas and buildings everywhere.

A short ( 2 hour ) ferry ride across the above-mentioned straits brought us to the mystical island of Tierra del Fuego ( “Land of Fire” in English, known as TDF locally ) and the second of the two “attractions” south of Puerto Natales. Known for its remoteness, colder temperatures, arid landscapes, lots of sheep and unbelievably strong winds, Tierra del Fuego is split between Chile and Argentina and has attractions of its own, most immediately for us being the King Penguin colony just east of Porvenir (and still on the Chilean side). We’d not seen this during our 2003 visit to TDF (which was mostly spent in Argentinian Ushuaia on the south eastern side of the island ). It’s unknown to many but there are in fact a few places outside Antarctica that offer a place to see penguins in the wild; western Tierra Del Fuego being one we were not going to pass it up. And, King Penguins no less, second only in size to the Emperor penguins

The whole “end of the road” thing is actually a bit contentious down here – speak to a Chilean and the Pan Americana ends ( as it starts ) on “continental“ South America ( at Fuerte Bulnes ). The Argentines will have none of it and say it ends on Tierra Del Fuego ( even though it’s an island and not connected to the South American “continent” ). Thought we would do the former in full and as much of the latter as border restrictions allow ! A measure of just how ridiculous these “extremity” claims have become – Chile has now reclassified the small town of Puerto Williams ( which lies just south of Argentinian Ushuaia, albeit also on an island ) as a ‘city’ so they can boast the “most southerly city in the world” taking that claim from nearby Ushuaia, Argentina. Imagine, a “city” …….with a population of less than 3,000 people !

While in TIerra Del Fuego some exciting news emerged re border crossings that was particularly relevant to us. Chile and Argentina were, it seemed, bringing forward the opening of one of the southern Patagonian crossings from January 1st to December 22nd….just days away ! We had long hoped to be in El Calafate ( Argentina ) for Christmas where we promised to treat each other to a nice hotel for a few days – if this news were true we might just be able to swing that. The wild camping of late had been great and driving the “long endless roads” of southern Patagonia appealing but the thought of a nice room, hot shower every day and a little space to spread out for Christmas was, well, tempting too ! With a PCR test possible in Puerto Natales and same day results available this just might work – the fact that we could not cross to Ushuaia on Tierra Del Fuego actually saved us a couple of precious days so a plan was hatched to head back to Natales, get our PCR test, and drive on to Argentina.

As we ( hopefully ) close out our Chilean chapter late this week both Lois and I wanted to wish all of our regular readers a very Merry Christmas ( or rather, Felice Navidad !!!!! ) and Happy New Year. Please keep the comments coming, we love hearing from everyone !