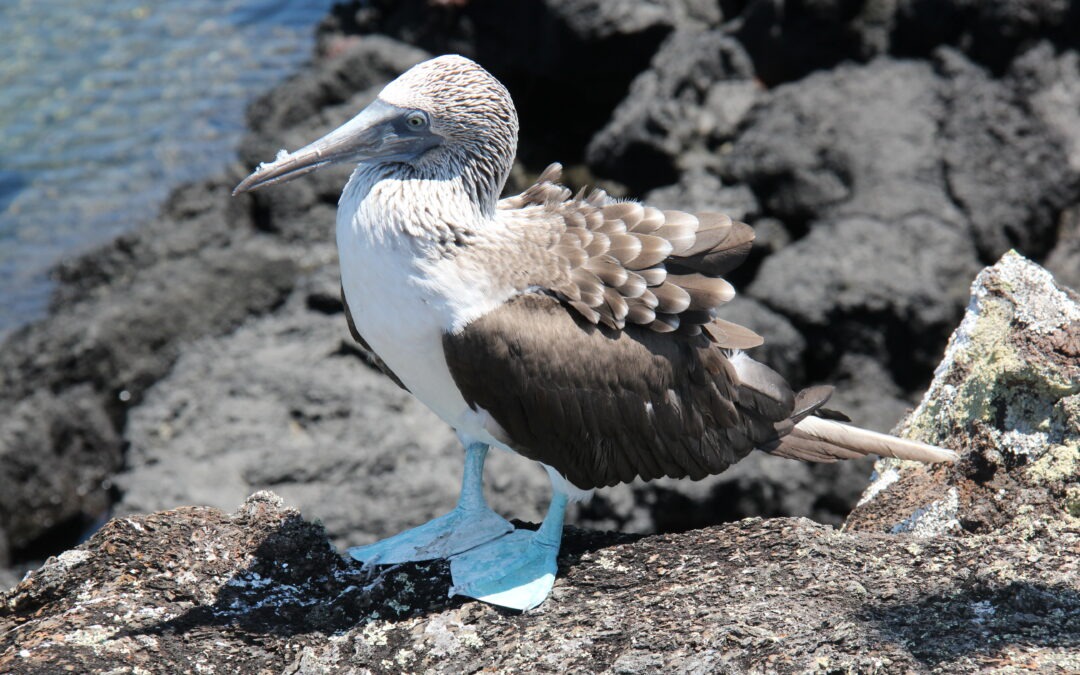 Mere mention of the Galápagos Islands conjures up images of otherworldly giant reptiles, rare and colorful oddly named birds and a profusion of amazing undersea creatures. Few would not jump at the chance to go there and while it is remote and far from almost everywhere, not so when you are already in Ecuador. Having passed up that opportunity when we were time-restricted once before there was no such hesitation this time around. Once our Galapagos week was booked from Quito, both of us were like kids at the gates to a theme park while sitting in the airport lounge waiting to depart.

Straddling the equator, this province of Ecuador lies about 1,000 kms west of the South American continent. Because of its relative isolation, the archipelago contains an unusual abundance of plants, animals and marine life not found anywhere else in the world. Famed British naturalist Charles Darwin visited in 1835 on the HMS Beagle ( much reference to Darwin can still be seen all over the Galápagos) and what he observed here contributed significantly to his theory of evolution.

The islands truly are unlike any other place we have been and their impact is immediate. Just driving  in to town from the airport in Baltra – a 25 minute trip – we’d already seen 3 giant tortoises. Simply walking around the islands – before we even ventured underwater – we were constantly surrounded by unusual and exotic  ( to us anyway ) wildlife. In many cases you had to be careful not to tread upon, or trip over, them ! That, and the fact that almost no animal we saw exhibited the slightest fear of humans. Combine the uniqueness of the wildlife and it’s accessibility and you have a mecca for wildlife enthusiasts that deserves every bit of its reputation for being an experience like no other.

We’d heard many warnings about the expense of the islands – and sure, the $10-20 “tax” paid to enter each island was annoying ( if not budget breaking ), and the $100 USD ( per person ) Galapagos National Park Fee was exhorbitant by any global measure but beyond that we did not find that living in, and travelling around, the Galápagos Islands to be much more expensive than anywhere else in Ecuador. Somewhat more, but not much. Considering it’s huge international appeal, its remoteness, its uniqueness and the fact that most people will only ever visit once, based on our own experience we’re glad we just bit the bullet – if you are thinking about going, our advice is just do it !

Getting between the islands was easy with regular ferries taking just a couple of hours, and tours, where needed ( they weren’t always ) were easy to book. While all-inclusive, luxury (and thus expensive) Galapagos cruise boats could be seen visiting all islands and are popular for those wanting the 5 star treatment, “doing your own thing” ( as more and more do now ) is also very simple and takes much of the financial sting – and none of the pleasure – out of the Galapagos  experience.

Like most, our trip was for a week and covered the three main islands. Each had its own distinct appeal, though our favorite was unquestionably Isabela. Miles of long white sand beaches, easy access to the sights, and a quaint main village with sandy streets gave it a very “South Pacific island” feel. Add to that wildlife that was easy to see and one of the best tours we have ever experienced made Isabela the most memorable for us.

Countless others who went before us had recommended the “tuneles tour” ( tunnels tour ) and it was unquestionably the highlight of our time in the Galapagos. On this 5 hour boat/land tour we swam with giant marine turtles, sharks, sea horses, penguins, countless tropical fish and saw several Blue Footed Boobies up close. Simply magical ! That’s not to say that giant land tortoises, countless marine iguanas and sea lions weren’t appealing ( they were ) but there were so many of them roaming wild ( the latter two at least ) that you almost stopped noticing them. The boobies, sea horses and penguins were harder to find.

San Cristobal had one of the nicest beaches on the Galapagos, Playa Chino. A little tougher to get to so we hired a taxi and took a tour there and on the way visited Junco lake ( home to many frigate birds ) and one of the better Giant Tortoise rehabilitation centres. There is one on each of the main islands where the species, which is endangered, are kept in a protected area to ensure the populations continue to recover.

However you want to see them, the Galápagos Islands offer an otherworldly natural experience – we’re certainly glad we carved a week out of our overland trip to make it possible and would highly recommend a visit to anyone considering it.

Check out our One Endless Road YouTube channel for some live video clips of our time on the Galapagos: