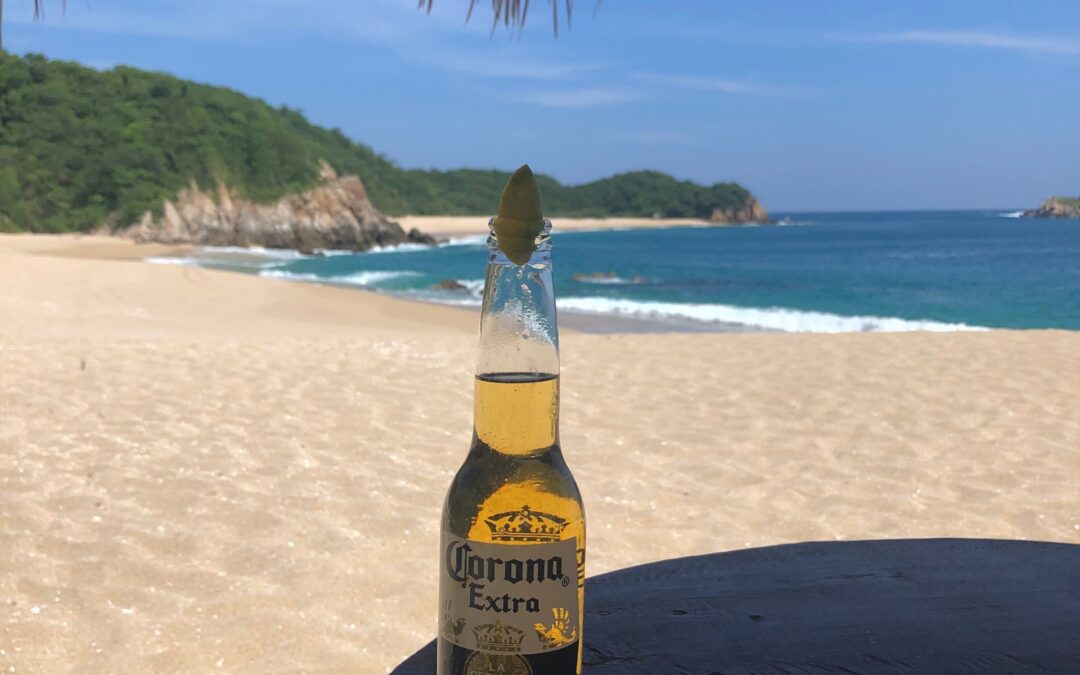 Fifteen years ago Lois and I had travelled to Oaxaca state en route to the beachside community of Puerto Escondido where we spent a memorable 10 days. Memorable, for the great weather, great surf and as always, the people we met. Memorable as well for the windiest, most nauseating, and at times breathtaking journey we had ever taken in a minibus – a journey from Oaxaca city to the Pacific coast ( to get to Puerto Escondido ) on “Highway” 175. While only 235 kms on the map, it was back then, and turned out to be again, all of a 6 hour journey, only this time, driving ourselves, we battled a torrential tropical storm, dodged downed power lines, and crossed many overflowing creeks and partial mudslides. Turned out Mexico’s “rainy season” was not quite over yet. Nice to have had a high clearance 4×4 – we saw many smaller vehicles turning back. One of those times as well where, having descended 5,100 feet there was a palpable sense of relief when we finally reached our destination. Note – the following images were shot through the windshield, wipers on, in heavy rain, hence the reduced quality – couldn’t open the window in that downpour !

The destination in this case was Huatulco, or rather the nearby beach community of San Agustín. Having enjoyed the relative cool of the highlands for a few weeks it was definitely time to switch gears and spend some down time on a beach – great reviews on iOverlander, subsequently endorsed by our new friends John and Kayoko, steered us to the Dutch-run “Don Taco Overlander Beach Campground”. While the Dutch owners, Franz and Anneke were on vacation, their ( Dutch ) caretaker, Mark, ran the place like it was his own and was great company for the 3 days we stayed there – even sharing some freshly caught tuna fish with us and another overlanding couple from Germary ( who, like us, were headed ultimately to Ushuaia, Argentina ). Probably one of the best true “beach” campgrounds on the Mexican coast, at Don Taco your rig was on the sand and literally just yards from the waves.

Don Taco was just the recipe we needed to recharge the sightseeing batteries – one can get a little ‘churched out’ and ‘ruin weary’ in these parts unless you periodically change it up. What really surprised us at San Augustin was the sunrises. Being on the Pacific coast of Mexico ( ostensibly its “west” side ) one expects only sunsets, stunning examples of which we had seen all the way down the Baja. On closer inspection however, when you are this far south in Mexico the country kind of lays on its side – when looking out at the Pacific you are thus looking more to the south, not west, and depending on the particular angle of the beach you are on, you can ( and we did ) experience impressive sunrises. See below. The sun setting on the mountains behind us at night also gave a very picturesque orange glow to the whole campground. We kind of had it both ways at Don Taco’s. A small bit of misfortune while there – we realized we had “blown” one of our two, 100 watt solar panels. Not a single volt was coming out of it. Yes, we could survive on 100 watts but it would mean the occasional shore power top up and more careful use of the fridge until we could replace it in Mexico or ship one down from Canada – being a lightweight “flexi” panel dramatically limited our options in Mexico at least.

Continuing east in Mexico ( that just seems wrong – feels like I should be saying”south” ! ), the plan was to reach San Cristobal de Las Casas in Chiapas, spend time there before heading to the ruins of Palenque at which point we would enjoy our last weeks in Mexico in Yucatan. As was our experience going from Oaxaca to Huatulco, the distance on the map and the time required to get to some of these places seemed totally at odds. A combination of drastic elevation changes ( sea level to 7,200 feet ), narrow shoulderless roads, many small towns in between and, in the case of Huatulco to San Cristobal, a taxi blockade along the way, meant the latter journey took all of two days. Scenic- yes. Tedious – that too. We realized, only once we were there, that this segment of the south would have us crossing the “isthmus” of Mexico – that “skinny bit”. Technically known as the Isthmus of Tehuantepec, it represents the shortest distance between the Pacific coast and Gulf of Mexico. In the low lying parts it is extremely windy with lots of cautionary signs along the road. We managed to stay upright but were not at all surprised to see more wind turbines there than either of us had ever seen in one place.

Both Oaxaca and Chiapas states have been somewhat restive over the past decade or so with their indigenenous populations making their feelings known on a whole list of grievances – teachers’ salaries, taxi fares, truckers’ pay and a history of other perceived areas of discrimination. Road blockades, imposition of unofficial highway “tolls” and the like are not uncommon. We saw a truckers strike ( clogging the main road into town ) in Oaxaca city and had to re- route ( 2 hours out of our way ) around a taxi blockade in Ixtepec en route to San Cristobal. A funny way ( in my mind ) to display your dissatisfaction, but hey……T.I.M.

Very disconcertingly, during that part of the journey, a smorgasboard of dashboard lights suddenly came on – “ABS”, “Brake Fluid Low”, and “Stabilitrac Alert”. Odd, because we had just a few days earlier had a full service. We nursed the truck carefully into San Cristobal ( thankfully, with questionable brakes, we were “ascending” 7,200 feet rather than descending ).

Despite the trials and tribulations of getting there, San Cristobal de las Casas certainly lived up to the high expectations that had been set. Probably Chiapas’ prettiest city, the combination of great weather ( always nice and cool at that altitude ), a lively arts and crafts scene, cobblestone streets, many locals ( especially the women ) wearing traditional garments and just the vibrant church colours and colonial era buildings give the place a special appeal – so much so that it was packed with foreigners; travellers in general, ex-pat residents and many students here to take Spanish lessons. Not without good reason is it one of the most popular stops on the overland route south.

As we closed out our week in San Cristobal in preparation for the “Road to Palenque”, some good news. What with washed out roads, failed solar panels and shaky brakes we needed some !

First, the brake issue on the truck was quickly identified by the GM dealer in San Cristobal and rectified. It seems the dealer in Oaxaca, when doing the brake fluid flush had not properly dealt with the passenger rear disc brake and it was indeed leaking and draining brake fluid. Some sort of seal, or cap, was not in place in any case – lucky we took it in promptly. As an added bonus they also took care of an outstanding recall issue on the vehicle – now everything was up to date and this would hopefully be our last visit to a dealer for another 10,000 kms at least.

Secondly, “Truck Camper Adventure“ just published a review I had been asked to do on our truck and camper (and they have asked for a couple more articles); our first published story ! For anyone interested in some of the more technical aspects of our “rig”, read all about it here: