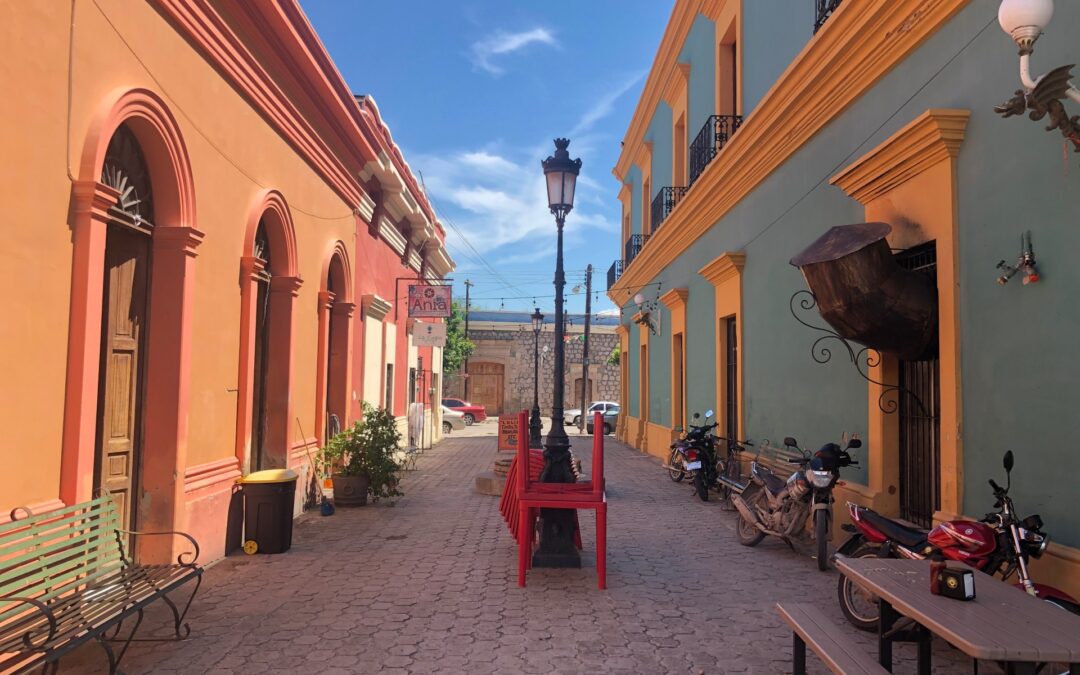 True to form, Baja remained intensely hot for our last few days there – there would be no respite from the humidity either. Our route to La Paz ( point of departure for mainland Mexico ) took us north from Los Barriles to another great beach community – or should I say twin communities, La Ventana and El Sargento. We managed to find a great spot at the latter, a campground right on the beach but up high so that it included an amazing view of the bay. That was fine until the owner offered us  an air conditioned casita ( small cabin ) for not much more so we quickly transitioned to that – like I said, it was HOT, and a pretty easy “sale” with humidity in the high 80’s ! No kite boarders around, apparently they descend on the place in November, so there were deals to be had. Again we found ourselves the ONLY people there until a local couple showed up late in the day – just incredible to see such beautiful beaches, lapped with crystal clear, warm water – and practically deserted. Such is the off season in Baja.

Despite the off season, we could not rely on just driving on to a ferry so chose a departure date in advance and decided to spend a few down days in La Paz, the capital of Baja California Sur. The city was actually a real surprise – not at all on Mexico’s top places to visit but well laid out, with history dating back to the times of the Spanish and one of the prettiest Malecon’s ( seaside boardwalks ) we have seen so far. More of a big-town feel with no apparent high-rise “Centro” . It gave us the opportunity to do some exploring, catch up on some shopping that needed to be done, walk the Malecon, sort out the ferry and visit its two famous beaches – Balandra and Tecolate. The former, where we spent more time, was stunning, as the pictures below attest  – the latter, not so much ( but perhaps it was the dune buggy’s buzzing by at 120 km/h much of the time we were at Tecolate ! ).

Leaving La Paz started out well – managed to get to the ferry terminal, check in, do the vehicle weight check,  and clear the Aduana  (customs) as expected . As a side note, Baja is one of those special economic zones and in some respects operates almost autonomously of the rest of Mexico – as such, when leaving, and crossing to Mexico proper, the procedure is somewhat like crossing the Mexican border all over again; passport checks, food inspections – the whole bit. It was when we got to the actual ferry – as in, ready to drive on – that we got an unpleasant surprise. I was told I need to go back and “change my ticket” – as I drove off the weigh scale earlier, someone had decided our truck with pop-up camper was in fact a “motor home” ( yes – a whole new rate class ). Protestations to the contrary were having no impact, Lois already on the ferry ( passengers board on foot ), and time ticking by options were limited. We were cut a little slack in the end- they decided it was just a “mini” motor home – but the cost had still more than doubled. The sad irony here was that we have occasionally lamented not having the space of a bigger motor home ( as unsuitable as it would be down here ) – on this day we wanted to have a truck / camper, but apparently we don’t !

Six hours later the ferry was docking in Topolobampo ( port for Los Mochis) after an uneventful and very smooth crossing. The only other foreigners on board were a French couple who were wrapping up their own independent 3 week holiday in Mexico – interestingly, the wife’s first question to us was “Have you met many other travellers ?”They too, were shocked at how few were down here.

We’d been on the fence about whether to visit Barrancas Del Cobre ( Mexico’s famed Copper Canyon ). By all accounts, a world class sight, and larger ( by several times ) than its more well known northern neighbour, the Grand Canyon in Arizona. We ultimately decided to go for it and headed to El Fuerte, a convenient jumping off point for “El Chepe”, the train that takes you through the canyon and on to Chihuahua. El Fuerte is a pretty little town itself – another of Mexico’s “Pueblo Magicos” and with any interesting history and some great historical architecture. Sadly, our Wednesday arrival meant an almost two day wait for the next train on Friday and by then the weather had turned seriously bad high up in the mountains with a forecast for four more days of the same. Mexican Independence Day was fast approaching, this cramping our accommodation options ( we would not have our vehicle with us ) and with Lois having just been treated for an intestinal infection, it was decided the Copper Canyon excursion would have to wait – we expect to be in Mexico many times again in future and would do it in better conditions. Perhaps a different call if we were in a more far flung corner of the world for us – but for this, we could easily return.

Fortunately, Mazatlan was the next stop on our travels south and a long anticipated visit with an old colleague of mine awaited. Pauline ( who worked with me many years ago ) had moved to Mexico 8 years ago from Canada. She was living with her fiancée Ted, in Mazatlan and had been waiting for us hoping we could join them for a few days, ideally over the Independence Day celebrations – a very big deal in Mexico ! A full days drive from El Fuerte got us to their beautiful condo right on the beach. Fantastic to catch up with them both, and to rest up for a few days – our reunion was celebrated with a night out at their favourite restaurant, watching a live band and a late night walk on Mazatlan’s 18km long Malecon – well, not all of it just quite yet – but perhaps over the next couple of days !