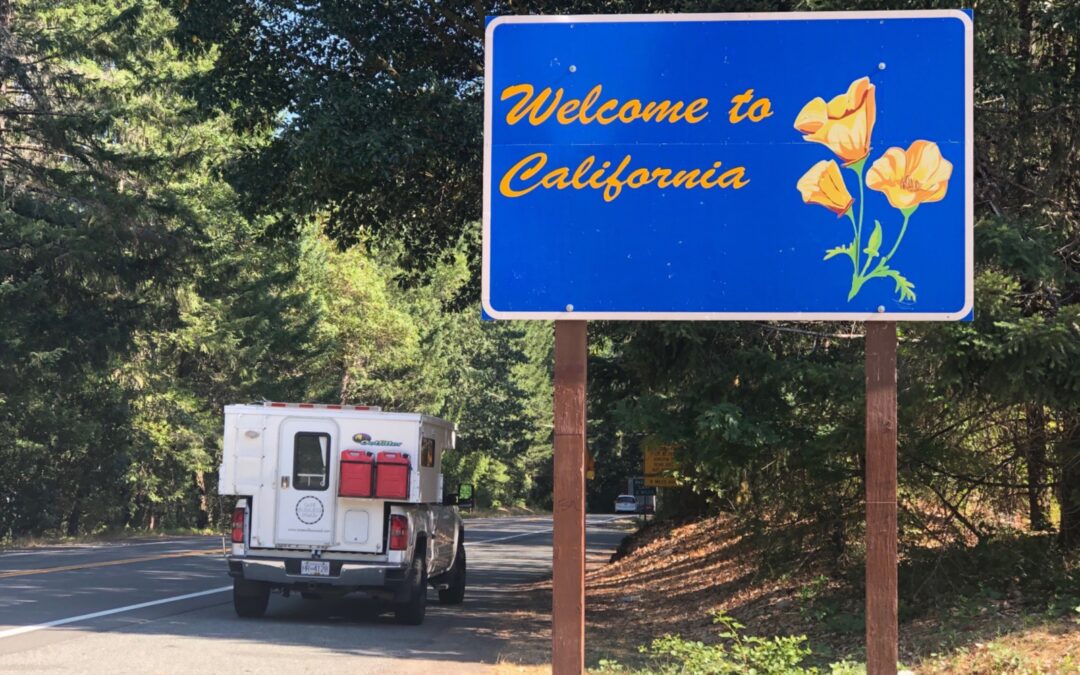 While Oregon had really “wowed” us, California also offered up an enticing array of sights and experiences. Bigger ( much bigger in fact ) and more well known, the “Golden State” advertises itself on marketing literature as a place to “Dream Big”. Perhaps…….however, our first impression was more one of “spend big” ! In truth we had been well warned by Californian’s we had met back at Cape Perpetua to expect to pay more in California – considerably more – for everything ! Indeed, a dollar more a gallon for gas, campsites at $35-45 versus $25-$29 in Oregon and of course, a sales tax on everything ( where there was none in Oregon ). Fortunately we had loaded up on pretty well everything we could to limit the impact. Beyond that, as always when on the road – grin and bear it !

Coming from the north the redwood forests were our first taste of California ( in fact, they start in Oregon – the main road south is known as the Redwood Highway ). As anyone who has seen them can attest, they are massive and truly awe-inspiring. Standing next to one a ‘man’ seems tiny by comparison. The Jedediah Smith National Forest  in Cedar City, the Avenue of the Giants further south on the 101 all provide ample opportunity to hike through them or simply stand and view them in amazement. The simply named ‘ Big Tree’ in Humboldt State Park is over 1500 years old  and another ( which we did not see ) is recorded at over 2200 years old – started growing before Christ was born !

After a couple of days focused on the redwoods, we explored the coastal road (Highway 1 ), which, quite literally, hugs the coast for a few hundred kilometres and provides a close up view of beaches, rocky headlands and some great camping opportunities. If not quite as stunning as Oregon’s, California’s coast did offer the benefit of a few degrees more warmth and was generally absent the thick fog that shrouded the coast of its northern neighbour. That said, the roads reached new heights of “windy-ness” ( is that a word ? ). Very slow going in many places.

Cutting back east at the small town of Jenner we climbed over a low mountain range and passed some eclectic Californian small towns and enjoyed the best burger ever at a Forestville classic – Carr’s Diner. On through Sonoma ( known for it’s wines ) and through to the Napa valley ( world famous for theirs ).  Explored the towns and vineyards of the valley starting in Calistoga in the north, ending in the town of Napa itself in the south.  Beautiful, but packed with tourists. Napa may have a few years head-start on us in the Okanagan valley with their wine industry ( they started there in the 1800’s ! ) but the setting lacks the backdrop beauty of our majestic Okanagan lake. To us, vineyards without the big lake just seemed to be missing something ! Lois had really been looking forward to the wine tasting and very much enjoyed the servings at Beringer, one of the oldest in the area. Being high season it was busy everywhere – so we only visited a few.

Prior to exploring San Francisco which was now just to the south of us, it made sense to visit Yosemite National Park first, about a 4 hour drive east. Can’t believe we actually deliberated on going – but we did. In short, a truly amazing park, arguably the most famous in the US ( certainly one of ). The pictures above will be recognizable to many – ‘El Capitan’ and the ‘Half Dome’ get lots of attention but the hikes ( we did a couple ) and other sights made for a memorable couple of days. Crowded to the extent we had to  ‘boondock’ both nights but no problem finding sites just outside the park….normal for the middle of summer and a fun experience itself.

Our week closed out with the drive back towards San Francisco – and it was a hot one – 42 degrees as we drove through Stockton in the dry interior of the state. The plan was to get close to the city, and commute in to downtown to do the sights over a couple of days – planned to camp in the funky and popular Sausalito area, just over the Golden Gate bridge.

Next post, an update on the sights of San Francisco and beyond !