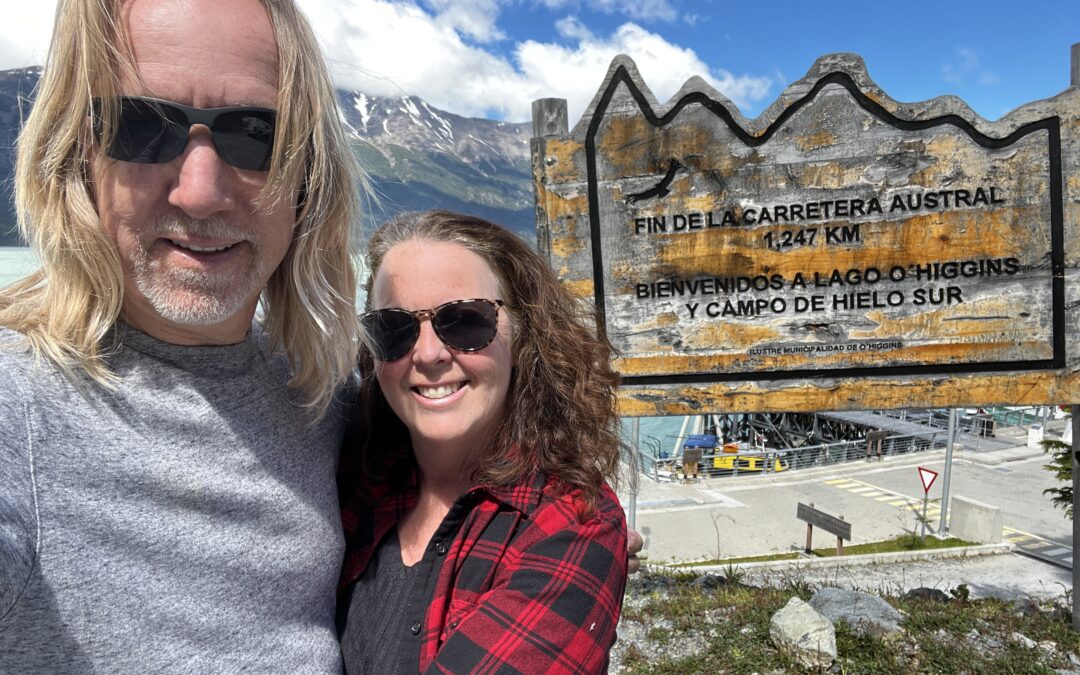 While in Puerto Rio Tranquilo the young lady at the tourism office strongly encouraged us to take a drive to Chile Chico, a small town near the Argentine border but running almost 100 km east from the Carretera Austral. It would, she said, offer some of the most stunning views of the Andes that you will see in the area.

That endorsement in hand shortly after leaving “Tranquilo” we took a hard left and headed east towards Argentina. She was right – the views, as we ran along the southern edge of Lago General Carrera, were impressive and offered a different perspective than we had from the normal north-south route . In reality we didn’t need to go all the way to Chile Chico since the first 50 km offered the most expansive views. Given that the road got incredibly challenging about 60 km in I figured it made sense to turn around and head back towards the Carretera. Chile Chico itself did not offer a lot other than being a popular border crossing back in the days when you could cross to Argentina wherever you wanted; not possible now but what a wonderful thought!

In fact the last 10 km of that road were some of the most dangerous we had travelled – real white knuckle stuff. Steep, deeply rutted, off-camber sloped dirt tracks on the edge of a steep mountain- the kind of road requiring a deft combination of light braking, judicious use of very low gears and a steady hand on the wheel at all times. Views aside we were quite happy to finish that detour ! Back on the Carretera itself with formal camping options limited the only choice was to boondock – and the Carretera provided us a nice option near Puerto Bertrand positioning us for an easy drive into Cochrane the next day.

Cochrane ( as unlikely a Spanish name as you’ll find ) and the last town of any size on Route 7, was named after a British naval commander ( Lord Cochrane ) who assisted the Chileans in establishing their own navy during their independence battle with Spain. An easy place to spend a couple of days, we topped off our supplies and fuel for the long haul south to Villa O’Higgins. On a whim I wandered into the hospital to ask about Covid shots ( Chile was well down the path of 3rd shots – boosters – and we qualified age wise). With Omicron rearing it’s head globally and our original immunity waning it seemed a prudent step to take. Could not have been easier – a walk-in clinic was being held that day and we were both jabbed an hour later ( with Pfizer, no less ! ).

The final run into Villa OHiggins was an easier drive than expected – the 45 minute ferry ride from Puerto Yungay to Rio Bravo included, it was about a 5 hour trip…..hard to believe we were almost at ( quite literally ) the “end of the road” – the Fin de la Carretera. Sharing the moment with some German and American cyclists, a slew of Chilean motor cyclists and a few other Chilean vehicles was memorable – El Mosco was the campground of choice in O’Higgins.  We’d all travelled the 1247kms (+ + when you include the many detours most people take ) seen some amazing sights and had some great tales from the road to share.

For many of us the route south would not end there and by the time we left O’Higgins 4 days after arriving we’d met ( or knew of ) 11 other travellers that would be meeting up in Puerto Yungay for the long ferry journey south to Puerto Natales this coming Saturday. There were other foreigners around after all and a nice change after substantially flying more or less solo to date.

With a couple of days to kill prior to the ferry a side trip was made to Caleta Tortel ( a coastal village built substantially on stilts ). Extremely popular with Chileans, it was here we spent our last couple of days before the ferry. No campgrounds here either but we did manage to score prime real estate in the ( almost always full ) town parking lot up above Tortel with great views of the bay and our own ( more or less private ) deck ! Wild camping at its best……..