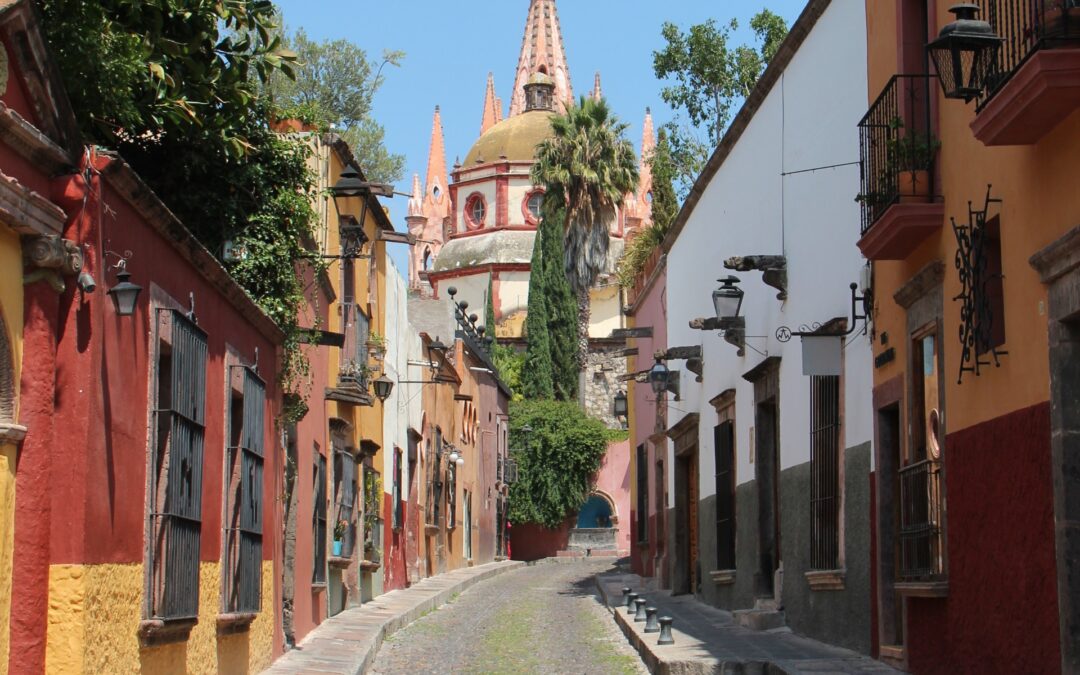 Having spent the last weeks in smaller towns and mid sized ( more easily driveable ) Mexican cities, the size of Guadalajara was immediately overwhelming. Never had we been so relieved to find our accommodation and safely settle in for the night ( or the whole weekend as it turned out). Given it is Mexico’s 2nd biggest city we deliberated for some time before finally deciding to drive in. Going right downtown meant practically all the sights would be within walking distance and the added benefit was that we could stay at what is by far Guadalajara’s most popular overland “campground”.  I emphasize campground because Guadalajara really does not have a campground in the traditional sense ( vehicle  camping not being as entrenched  in Mexico as it is in Canada, the US, Europe or Australia ). The location of choice is in fact a commercial parking lot which allows multi-day stays, has 24 hour security, and whose owner has taken a liking to overland travellers; they are welcomed with open arms. Complete with fast wi-fi, a bathroom and friendly staff it is also located in a quiet, upscale area, right downtown and near all the sights; what more does one need – some  overlanders stay there weeks !

We enjoyed it for the weekend and also enjoyed Guadalajara’s sights – there’s a lively entertainment area close by and a great selection of restaurants; just a great vibe in this city very popular with fashionable young Mexicans. The forecast gloomy weather never materialized so our run of great weather continued on.

Until we had bumped into Andreas, our German friend, in Durango,  the city of Guanajuato ( our next stop ) was not even on our radar. Although we knew it was a central location in the Mexican revolution and thus steeped in local history, our plans were to leave Guadalajara and go straight to San Miguel de Allende. Since Guanajuato was more or less en route plans were quickly changed and, after a brief swing south of Guadalajara to check out Lake Chapala and Ajijic, we turned east towards Guanajuato.

Getting there was half the fun – while Lois generally navigates very effectively, her mixing of “Guanajuato” with “Guantanamo” ( as in the American military base in Cuba ) had our trusty Google Map getting a little confused – hey, what do you mean we can’t drive to Guantanamo ? A city of 185,000 and capital of the state by the same name, Guanajuato is built on a hillside and “blessed” with extremely narrow roads, low clearance tunnels and poorly marked one-way streets. Even more challenging to drive in than Guadalajara, most don’t even attempt to drive through the city. Let’s just say I would not want to be driving anything bigger than we are driving ! It was one more time where we really appreciated having a smaller, more maneuverable vehicle – eventually we found our cliffside campground. Another highly popular “campsite” on the overland trail, the views certainly made getting there worthwhile. Another atypical spot, it’s really more a level backyard in a large cliffside house but it came replete with spotless showers and toilets, level parking and power and water on site. It would have been on our top 3 on the trip so far were it not for the cacophony of barking neighbourhood dogs the likes of which we have never experienced before and hope never to experience in future ! Torture for sleeping !

Barking dogs aside, Guanajuato is unquestionably one of the prettiest of the Mexican cities we have visited, and is designated a UNESCO world heritage site  for its important history and colonial architecture. It’s got to be about as classically Mexican as you can get. The city also lent itself to doing all sightseeing on foot – gotta love the smaller cities ! On our last day, “Victor”, a younger ( to us anyway ! ) American pulled into the campground in his Toyota 4Runner kitted out with all the usual overlanding gear. Turns out he is on pretty much the same journey as us – from his home in San Francisco he had travelled north to the Arctic, turned around and is on his way south to Tierra Del Fuego at the bottom of South America ( with plans for Africa after that ) – needless to say many notes were compared and tips shared between us !

Thirty four years ago, honeymooning around Europe, we met a well travelled Brit who spoke about his time in Mexico in the 70’s. We could not recall all the places he listed as “must sees” but one stuck with us all these years – San Miguel de Allende ( or SMA as it is often abbreviated here ). Finally, all these years later, it was the next stop on our travels – based on his glowing reviews we had high expectations. Like Guanajuato, it played a pivotal role in Mexico’s revolution and ultimate independence from Spain in the 1820’s – the two cities are not only close geographically, they share many other features and SMA is also a UNESCO world heritage city.

As our British friend did, there is good reason people fall in love with this place and equally good reason why an incredibly large number of “gringo expats” choose to make this place home – it just has so much to offer. Not just another Pueblo Magico, though it is one of those, it offers history, beauty, year round great weather and just a very cosmopolitan vibe. Like Guanajuato, it’s elevation at over 6,000 feet keeps it free of the extremely high temperatures, oppressive humidity and potentially malarial mosquitoes. Great restaurants, an eclectic artsy feel and some of the most traditionallly Mexican cobblestone streets we have seen so far. Something else we had both noticed about the folks in this part of Mexico, or more specifically had started to notice in Guadalajara, Guanajuato and also San Miguel – was their style. Dressed more fashionably and with, in some cases, a style sense on par with the French or Italians, whether it be chic university students scurrying around on Vespa scooters, elderly scarf-clad retired men sipping coffees in a cafe or proud parents dressing up small kids; it was definitely noticeable.

Another popular stop on the overland route south ( or north ) it also offers probably one of the best, and best located, campgrounds in Mexico. Somewhat pretentiously called “The San Miguel RV Park and Tennis Club”, the facilities were fantastic and included two beautiful clay tennis courts. A real oasis in the city. SMA was also the first place on our trip so far where we have met more than one other overlander; beside us was a German couple in a massive M.A.N. custom built overland truck ( heading to South America ) and across from us another German couple in a Toyota “Troopy” ( as we call them in Oz ) – Ule and Ute had traversed the Sahara multiple times, travelled Africa extensively over the past 10 years and were now retired and following the same route as us, albeit at a somewhat slower pace. We enjoyed their company while in SMA and shared some invaluable information with each other.

While San Miguel’s “sights” were easily seen in a day, we took the opportunity to simply relax here, shop, explore the many cobblestone back streets, sample the great restaurants, replenish our supplies, enjoy the company of our new overlanding friends and do some long overdue vehicle cleaning . Next stop – the hustle and bustle of Mexico City.

PS: Try as I might it is generally impossible to find Wi-Fi that is is fast enough to upload all the blog images in the same full resolution in which I shoot them. They should be reasonably clear on a small screen – just don’t enlarge them ! If anyone out there has the technical savvy to help me address the issue, please comment !